At least will the Red Devils keep up in league play?

13 points out of a possible 15 were taken by English record champions Manchester United from their first five Premier League games. Meanwhile, there was a damper in the Champions League with the 1:2 defeat in Bern as well as in the League Cup during the week, where the Solskjaer eleven failed after 0:1 home defeat against West Ham United already in the third round.

Although Aston Villa also had to suffer a penalty shoot-out exit in the League Cup at Chelsea. But the Lions sold themselves quite dearly at Stamford Bridge, which is why it is somewhat surprising that the odds in the run-up to the match between Manchester United and Aston Villa are so clearly in favour of the Red Devils.

The fact that Manchester United have not lost any of their last 18 games against the Villans certainly plays a role. Nevertheless, we believe the visitors from Birmingham can put in a similarly good performance as they did in London during the week at Old Trafford.

The biggest value we see in Manchester United vs Aston Villa is betting on both teams to score. Meanwhile, our Premier League Champions 2022 prediction looks at whether Solskjaer’s side could hit the big time again this season

Manchester United are still the English record champions with 20 championships won. However, the last time the Red Devils won the title was in the summer of 2013. Most recently, in the second year of Ole Gunnar Solskjaer’s reign, the Red Devils once again finished as runners-up.

Considering the fact that they have not always made it to the Champions League on a regular basis in recent years, however, those responsible can be quite satisfied with the current development.

The best attack in the Premier League

On a national level, the Red Devils have also had a very successful start to the season. They have picked up 13 points out of a possible 15 so far, which means that United are currently in third place only because of their goal difference, which is worse than that of Chelsea and Liverpool, who are level on points.

Never the less, the mood at the English record champions is subdued. First, the Red Devils were defeated in the Champions League by the underdogs BSC Young Boys (1:2), before they suffered another setback in this English week with a 0:1 defeat in the League Cup against West Ham.

Although Ole Gunnar Solskjaer rested many key players, this defeat does not change the fact that the odds are clearly in favour of the Red Devils in the run-up to the match between Manchester United and Aston Villa. However, given that they have lost two of their last three competitive games, the momentum could be greater at the moment… 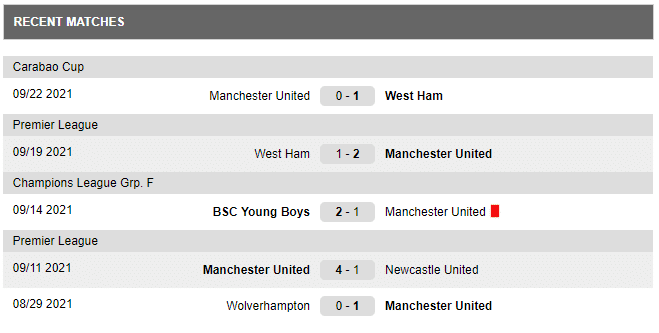 Aston Villa are one of only five English teams to have won the Champions League, or its predecessor competition (European Champion Clubs’ Cup), to date. Since the 2008/09 season, however, the Villans have no longer been represented internationally.

This makes the longing of the supporters all the greater to finally be able to include English weeks with European competitive matches in the calendar again. And all the quicker the euphoria flared up after strong performances.

Last Saturday, the Lions celebrated a spectacular 3-0 home victory over Everton FC, which once again fed the hopes of the supporters. However, with seven points out of a possible 15 at the start of the season, they are still “only” in tenth place in the table.

The team with the burgundy jerseys and the distinctive blue sleeves were able to take the momentum from the league to Stamford Bridge during the week, where a spirited performance at Chelsea in the League Cup led to a penalty shoot-out. In the end, the Villans bowed out there with their heads held high.

Most direct attacks in the Premier League

Aston Villa were once again convincing with their dangerous switching game. No other team in the Premier League has launched more direct attacks from inside their own half in their five league games so far, resulting in at least one touch of their own in the opposition penalty area – 15 in all

Manchester United against Aston Villa is a good bet for the Lions to score an away goal at Old Trafford, where they have only won one of their last 21 away games (two draws, 18 defeats)

There have been 190 meetings between the two teams so far and the Red Devils lead the head-to-head comparison by a clear margin. In the last 45 Premier League encounters, Manchester United have lost just once (33 wins, 11 draws).

When it comes to Manchester United vs Aston Villa, the prediction should not overstate the clear record between the two teams. After all, the Villans presented themselves in very good form against Everton and Chelsea last week. In addition, the team from Birmingham plays forward at lightning speed when there are moments of changeover and always comes up with dangerous finishes, while the defence is also very secure

Accordingly, we trust the Lions to at least score the away goal at Old Trafford. Irrespective of the difficult-to-predict outcome of the match, betting on goals on both sides provides the greatest value